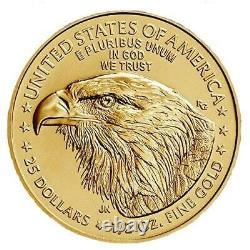 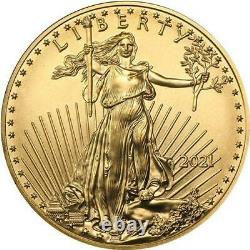 Every year the US Mint releases their annual issues of the highly anticipated. And the 2021 mintage marks the 35th anniversary of the program. First struck in 1986, the American Gold Eagles are minted in four different sizes and denominations. In 2020, the US Mint announced new designs for the reverse of the Eagle program, starting mid-year 2021. Until then, the classic design remains for the coins issued during the first half of the year.

Guaranteed 1/2 troy ounce of pure gold in BU condition by the US Mint. 2021 marks the 35th anniversary of the American Eagles program. Obverse portrays Saint-Gaudens rendition of Lady Liberty. Two designs will be featured in the 2021 release.

An eagle family on their nest during the first half of the year, and a new design in the second depicting a bald eagle's profile. The 2021 1/2 oz Gold Eagle Design. Designed by Augustus Saint-Gaudens in 1907, the obverse of the American Gold Eagles is one of the all time favorites in US coinage history.

The design was used for the Double Eagles until they were discontinued in 1933 when the US Mint stopped the production of circulating coins made of gold. This Saint-Gaudens design showcases Lady Liberty in all Her glory, striding forwards with the Capitol Building and the rising sun in the horizon.

She carries a lit torch on her lifted right arm, symbolizing enlightenment as She shines the way to America's freedom. A desire for peace is indicated by the olive branch She holds on Her left hand. The whole scene is encircled by six-pointed stars. As mentioned before, a new design has been announced for the reverse of the US Eagles. However, the classic eagle family design, created by Miley Busiek, has one last chance to shine as it is used during the first half of 2021, while the new design gets ready for production.

Busiek's creation depicts a bald eagle grasping a branch on its talon, close to lending on a nest, as it is adding one more piece to its home where its mate and nestling await. The inscriptions "E PLURIBUS UNUM" and "IN GOD WE TRUST" appear on the left and right hand of the design, respectively. "UNITED STATES OF AMERICA" is written on top and, on the bottom, it is inscribed 1/2 OZ. The new reverse design, announced in October of 2020, was created by Jennie Norris.

The artist stated that she wanted to encapsulate all "pride and wisdom passed down through generations" of bald eagles, as she represented America's national bird symbol gazing ahead. The mottos "E PLURIBUS UNUM" and "IN GOD WE TRUST" have been relocated to the top of the design, above the eagle's head.

The top still reads "UNITED STATES OF AMERICA'', but the order of the words on the bottom have been inverted, now saying "25 DOLLARS ½ OZ FINE GOLD. Also, the words on the outer rim are now separated by 5-pointed stars. The old design, by artist Miley Busiek Frost, features an eagle landing on its family nest with a branch on its talon. New design portrays a single bald eagle's head, intensely staring ahead, created by artist Jennie Norris.

Norris' design repositions the inscriptions "E PLURIBUS UNUM" and "IN GOD WE TRUST" to the upper-hand of the picture. The outline of the new reverse contains the same words as the classic one, but with the face value and the gold content inverted.

The seller is "sdbullion" and is located in Ottawa Lake, Michigan. This item can be shipped to United States.